General Lina Sarmiento was the Outstanding Chemist for the year 2010 bestowed upon by the Professional Regulation Commission. She holds a degree in chemistry from Adamson University.

Lina Sarmiento is an accidental policewoman.

At 21, the chemistry graduate took and passed the exam for a forensic chemist’s position at the Crime Laboratory of the Philippine National Police, not realizing what she was getting herself into.

“She thought she was just applying for a chemist position,” her husband Avelino recalled. “It turned out that the position was for police rank. So when she finished the training after six months, she was already a policewoman!”

But in the next three decades, Sarmiento, the mother of four grown children, would chart a path through the ranks of the male-dominated police organization that was unprecedented for members of her sex.

On Friday, the 53-year-old chemist made history by becoming the first female police officer to receive two stars. She was conferred the rank of director by PNP Director General Nicanor A. Bartolome, who also appointed her head of the PNP’s Community Relations Group.

Sarmiento thus became the PNP’s first female 3rd level official to hold the rank of director, which is equivalent to that of a major general in the military.

“This is a victory for the women in the uniformed service,” Sarmiento said in her speech at a ceremony at Camp Crame.

“We all know that in the past it was unthinkable for a woman to hold a key position, much less, head a large unit in the armed services. But as the PNP moves in step with the times, policewomen are now emerging as key players in the world of law enforcement,” she said.

Years ago, Sarmiento said, policewomen were relegated to administrative and desk duties.

“Today we see them side by side with the men in dangerous police operations,” she said. “Where before we were only at the receiving end of commands, today we also see women officers giving commands to male subordinates.”

But in an interview with the Inquirer, Sarmiento admitted that she had encountered moments when she felt she was discriminated upon because of her gender.

“I felt I had to work harder to be recognized because this is a male-dominated organization,” she said. Whereas, “if you’re a man, you just need to be present,” Sarmiento said.

But the times are changing, she said. Gone are the days when women were  assigned only to “family-oriented” positions in the organization, she added.

“I’m so lucky because the PNP is so progressive as far as working for gender equality is concerned, compared to other agencies,” Sarmiento said.

Sarmiento said what made her promotion sweeter was knowing it came from her own sweat and hard work, and not connections or membership in the Philippine Military Academy.

She recalled one conversation with a senior officer many years ago.

“One late afternoon, while we were waiting for a meeting to start, the officer told me: ‘Lina, why do you work so hard? It’s useless. We’re not PMAers. We will end up with nothing here. We’re only up to this level’,” she said.

“I remember answering him, ‘Sir, I don’t think about that. I just want to do my best in whatever I do. If we think that way, then we should just resign this minute’,” Sarmiento said.

“At the time, the thought of getting a star was farthest from my mind. It only dawned on me when my peers were already getting theirs. Now I am getting my second star. For a woman in a male-dominated organization, this is truly a gift,” she said.

Bartolome, however, said he chose Sarmiento to head the Community Relations Group not because he wanted to appoint a woman but because of her own abilities. “I think you will agree with me that she is tailor-fit for the job,” he said.

In the interview, Sarmiento said being a woman in the police service was challenging.

“We have dual responsibilities, one in the home and one in the office. Of course, while taking good care of the children, I have to see to it that the house is managed properly,” she told the Inquirer.

Her husband Avelino, a businessman, said there were times when Sarmiento would not be home three or four days straight. This forced their children to learn to fend for themselves very early.

“They learned to take care of themselves. They learned to cook their own food,” which would partly explain why their eldest son Mark Alvin became a chef, he said.

Their other children are Matthew Allen, 27, who works for a bank, April Madeline, 24, a medical student, and Aileen Marie, 23, a law student.

Since joining the police service as a forensic chemist, Sarmiento held various positions in the PNP Crime Laboratory, Directorate for Operations, Police Regional Office and the Philippine Drug Enforcement Agency.

She was erstwhile Director of the PNP Human Rights Affairs Office and the Police Security and Protection Group before she was assigned to her current position in the PNP Directorial Staff.

Sarmiento is one of only two female star-rank officers currently serving in the PNP. The other is Chief Supt. Lorlie Arroyo, Director of the PNP Crime Laboratory whose rank is equivalent to that of brigadier general in the military.

During the same ceremony, Bartolome also administered the oath of office to newly promoted Chief Superintendent Henry Rañola Jr., executive officer of the Directorate for Integrated Police Operations in Visayas.

You may view the copy of the Chemistry Act (Senate bill 2049) HERE.

Senator Edgardo J. Angara pushes for amendments in the country’s Chemistry law in order to strengthen the profession and underscore its role in national development.

“Chemistry is an integral component of S&T, and sadly, the Philippines has been slow in adapting to changes which are brought about by the rise of international standards and global competition. Recent developments and innovations in the field have underscored the urgency of repealing the decades-old Chemistry Law,” Angara said who chairs the Congressional Commission on Science, Technology, and Engineering (COMSTE).

He added, “It is imperative for the country to enact a responsive policy instrument that is responsive to the demands of the profession and global competitiveness trends.”

The “Chemistry Law of 2009” seeks to emphasize the role of chemistry in national development by promoting and protecting the interests of chemistry profession. It also aims to elevate the standards of the profession by strengthening the promotion, regulation and measures for continued development in the field.

“Building a strong Science & Technology foundation is necessary for the country to push forward and become competitive on the global stage,” Angara emphasized.

Angara however revealed, “Science and Technology is not given utmost attention in relation to its role in the progress of our country,”

Republic Act No. 754 otherwise known as the Chemistry Law was enacted June 18, 1952 or almost six decades ago. It was deemed outdated and fails to response to the demands of global trends. The proposed Chemistry Law will boost the country’s aspirations towards global competitiveness.

“We intend to fuel the creativity of our local scientists and stimulate a synergy of ideas, forge connections between scientists in the Philippines and the international scientific community; and eventually propel the country as a respectable source of S&T innovations, much like Taiwan and Korea have done,” said Angara.

The Integrated Chemists of the Philippines (ICP), in cooperation with the Board of Chemistry, will conduct a Oath Taking for Chemists together with the distribution of PRC Certificates of Registration and Professional ID Cards to those who passed the September 2011 Chemistry Licensure Examination. The Top Ten examinees and Most Outstanding Schools will also be recognized by the Board of Chemistry. 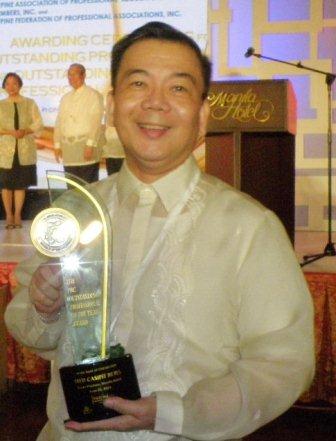 Let us all congratulate Fred Reyes for his award as Outstanding Chemist for 2011.

For his remarkable competence, expertise and leadership as owner, president and chief executive officer of a corporation that brings innovative and effective product concepts to the country’s personal care and food industries; for establishing a fragrance factory that trained over 6,000 would-be entrepreneurs in the perfume industry; for founding a company for skin care products for serving as chairman of wellness centers or skin stations that offer advanced non-surgical dermatological procedures; for his worthy contributions to society and the profession through his affiliation and active participation in various professional, civic and religious organizations, societies, clubs, international exhibits and conferences; and for bringing honor to the profession as a recepient of the Outstanding Chemist in Industry Award, Most Admired Entrpreneur Award, IT Excellence for SME Award and Most Outstanding Chemist Entrepreneur Award. 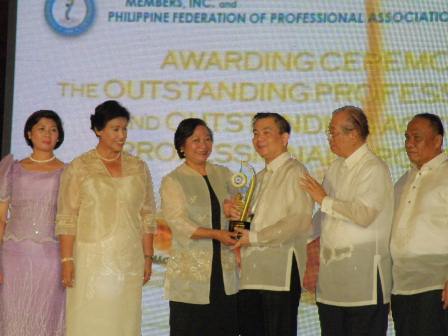 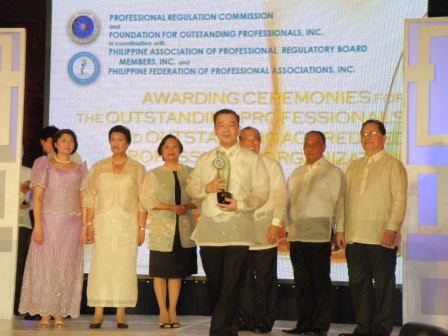 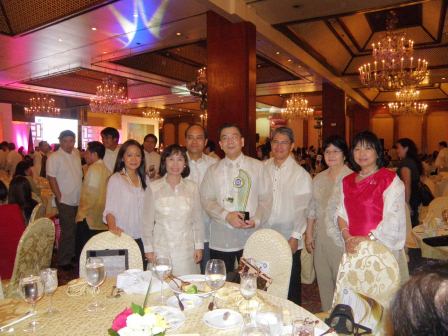