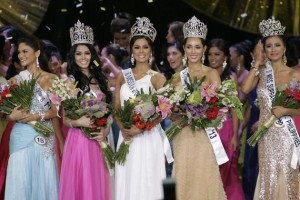 Ariella Arida (center) with fellow winners of the Binibining Pilipinas 2013

Our 2013 Bb. Pilipinas Universe, MS. ARIELLA H. ARIDA hails from Alaminos Laguna.  Ara, as she is fondly called by her friends, finished her high school at Laguna College (LC), San Pablo City.  She started her tertiary education in 2005 at the University of the Philippines Los Baños, initially with a degree in Veterinary Medicine, but shifted into BS Chemistry on her second year in the university, which she finished in 2010.  Her undergraduate thesis is entitled “Virtual Binding of Synthetic Nucleoside Analogues and Phyto-brassino steroids to NS5 Dengue Virus mRNA 2’-o-Methyltransferase Domain Using Dock Software”, which she presented in the 2010 Philippine Chemistry Congress held at Subic Bay, Zambales. 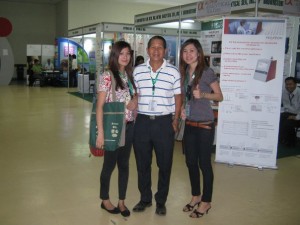 Her academic adviser is no other than the accomplished Professor Ernesto J. del Rosario who is known to his students as “Sir EJ”. Ara described Sir EJ as the “coolest and smartest teacher she has known”.  In the acknowledgement part of her thesis manuscript, Ara wrote “Sir, salamat sa lahat ng wisdom, mapa- Science, Philo, Psy, religion, lovelife, in short, anything under the sun, ang dami nyo pong natuturo sa akin”.  Ara’s favorite hang-outs in “elbi” are ICs and Boston Café which she acknowledged to have played a big role why she graduated because of its 24 hour-internet and cafe service.  She enjoyed eating and hanging-out with her barkadas at LB Square, Los Kababos, and Rally Point for the “comfort food” plus Baan Thai for her favourite pad thai.  Other things that she enjoyed doing in her college years during her spare time are going to the beach and bargain shopping. Being an Iglesia ni Cristo, she has also been a devoted church goer, making sure to go to church in spite of her busy schedule.

“From a different kind of life I used to have—I used to go to school wearing rubber shoes and a laboratory gown—and now here I am with the crown, wearing makeup.” It was the only thing that mattered after she was crowned Miss Universe Philippines 2013  at the 50th culmination night of Binibining Pilipinas last April 14, 2013 at the SMART Araneta Coliseum. Overwhelmed by her victory, she says she is prepared to handle the pressure that comes with her new crown.
Ara, who also won the Best in Swimsuit Award earlier that night has also competed at Miss Philippines Earth 2012 and was a former Mutya ng Laguna titleholder.  She is a ramp model and enjoys sports including volleyball, swimming, and running. 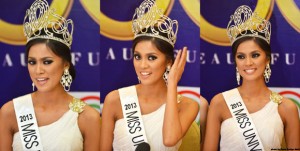 During the most anticipated question and answer portion, she was asked by PNP Chief Allan Purisima what lesson in life women can teach men. Her answer was, “One lesson in life that we, women, can teach men is being sensitive. Because we all know that men are more logical when it comes to decision. They usually are more rational, straight forward. Unlike we, women, we use our heart and we tend to get emotional in some of our decisions. For me, sensitivity is something that we can teach men.”

She describes herself as an average person. But during this pageant she worked hard physically, mentally and emotionally which is evident in her physique and performance that Sunday night. She surely has big shoes to fill but no one can stop her from fulfilling her dreams.

Profession-wise, past beauty queens have covered a lot ranging from an Architect (Shamcey Supsup), a Pharmacist (Janine Tugonon), a Physical Therapist (Miriam Quiambao) and a Lawyer (Ana Theresa Licaros) to name a few. Will a Chemist bring home the most coveted crown this time?