Around one-hundred representatives from the academe, government, and industry sectors attended the two-day lecture-workshop on Practical and Cost Effective Solutions to Laboratory Chemical Wastes, sponsored by the Integrated Chemists of the Philippines (ICP) on 18-19 October at the Manila Elks Lodge in Makati City. A variety of resource speakers specializing in chemical waste management shared their knowledge to the participants. Dr. Fabian Dayrit (President, ICP) welcomed the participants. Dr. Glenn Alea (VP-Internals, ICP) served as the moderator for the event.

Engineer Gerry Sañez, head of the Hazardous Waste Bureau of the Environmental Management Bureau of the Department of Environment and Natural Resources, kickstarted the series of seminars on the first day. he discussed the Revised Procedures and Standards for the Management of Hazardous Wastes and how this affects laboratory waste management. Meanwhile, Dr. Veronica Migo, head of the Central Analytical Services Laboratory at BIOTECH in UP Los Baños discussed ways on classifying chemical wastes. The next three seminars on Management of Chemical Wastes and discussion of best practices were devoted for each sector: Dr. Allan Yago (pollution officer, Institute of Chemistry, UP Diliman) for the academe teaching laboratory, Ms. Edna Mijares (CEO and President, Jefcor Laboratories) for the research and analytical laboratory, and Ms. Gretchen Fontejon-Enarle (President of SPIK and PCO of Pacific Paint Boysen) for the industrial laboratory.

On the second day, Dr. Louernie de Sales, an industry expert, enthusiastically discussed the storage, transport, and disposal of wastes from a treater’s perspective. Afterwards, the participants were grouped together to collaborate on planning their own approaches on chemical waste management for their respective institutions, moderated by Ms. Mutya Samonte (Public Information Officer, ICP). Each group was then allotted ample time to present their output to everyone. Ms. Mutya Samonte moderating the collaboration portion of the workshop

The two-day lecture-workshop ended with the participants properly armed with the know-how on dealing with their chemical wastes. ICP VP-Externals Ms. Edna Mijares gave the closing remarks, thanking the attendees for their participation and inviting them for future ICP events.

This article is originally posted on the Cebu Daily News website, and is written by Cris Evert Lato. 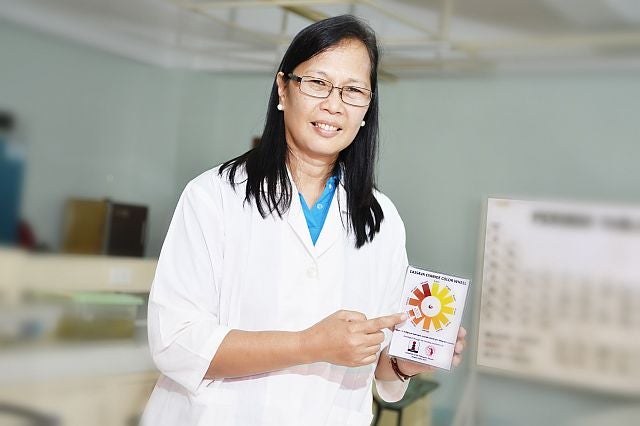 The Ilongga chemistry professor of the University of the Philippines–Visayas (UPV) in Miag-ao, Iloilo, who selected “molecular studies on cassava” as her dissertation, was alarmed by the news.

“I had to do something to educate people so we can avoid cases of cyanide poisoning from cassava consumption,” said Topor, who is also the director of the Graduate Program Office at the UPV campus in Iloilo City.

Her commitment was translated into the “Cassava Cyanide Color Wheel Kit,” a simple and easy-to-use product which can be used by technicians and farmers in the field to check cyanide content of cassava variants.

Her invention of the kit earned Topor a place in the 2016 roster of honorees of an advocacy campaign, The Many Faces of the Teacher (TMFT), run by Bato Balani Foundation Inc. and Diwa Learning Systems. Topor, described as a community biochemist, was one of four teachers from among a dozen finalists nationwide who were honored at the Waterfront Cebu City Hotel and Casino on Oct. 1 during an annual awarding event leading to the celebration of the Teachers’ Day on Oct. 5.

To use Tobor’s poison-detecting kit, a 100-mg cassava sample is placed inside a flat-bottom vial and is mixed with phosphate buffer solution. A peak rate paper is then introduced to the vial and is allowed to sit for 16 hours. The color of the paper changes.

Farmers can analyze the result using the color wheel where the darker color indicates higher percentage of cyanide. Topor drew inspiration from a testing kit sent to her from Australia.

“But I thought that we cannot always ask other countries every time we need something. If we can innovate, why not?” she said.

Cassava earned the reputation of being a dangerous root crop after a 2005 incident in Mabini, Bohol, claimed the lives of 30 children.

But Topor was quick to note that not all cassava variants are harmful to humans.

“People need to be educated about the nature of cassava to eliminate the fear of this root crop,” she said. Topor said cyanide is released by a cassava plant to protect itself from predators.

Industry standards note that variants with zero to 50 parts per million (ppm) are considered nontoxic variants. Between 50 to 100 ppm is moderately toxic while 100 and above is dangerously toxic.

This does not mean, however, that raw cassava with 150 ppm cannot be consumed.

But there are several ways to significantly bring down the cyanide levels in cassava.

When cooking cassava, Topor said the root crop should be peeled and cut in small pieces. When boiling cassava, do not put a lid over the pot.

“Cyanide is volatile, and it can escape at 26 degrees Celsius,” she said.

Topor said cassava is the kind of root crop that is not best eaten “fresh” or when just newly harvested.

She advised waiting two to three days before cooking the root crop as a freshly harvested cassava has higher cyanide content.

Married to African national Wollor Topor (also a professor who is a dean of a university in Liberia) who considers cassava as a staple food, Topor said she has learned to appreciate different ways on how cassava is prepared.

One of these products is gari, which is made from grated raw cassava.

At home, Topor said, the grated cassava is placed in a jute sack. The sack is tied and is left to ferment for three to seven days. The process helps reduce and detoxify the cyanide content of cassava.

Topor hoped that the education seminars she conducts would encourage farmers to plant more cassava especially that the DA is providing them with planting materials.

“I met many farmers who want to regain their productivity, but they just don’t know what to do,” she said.

Topor donated the first batch of kits to the Suclaran Barangay Council, fulfilling her promise to contribute to community education on food safety.

But Topor did not just stop here.

She built alliances and partnerships with the local government units and the Department of Agriculture so she can educate people about cassava in the Western Visayas region.

“My recommendation is to immediately spot-check the backyard farms planting cassava. Using the kits, we can immediately identify which variants produce higher levels of cyanide. If this is the case, the LGU can urge the farmers to replace the crop,” said Topor.

For successful examinees, you may download the official invitation of the ICP to the Oath-Taking Ceremony by clicking on this link. Other pertinent information are also found in the said file.

The Oath-Taking Ceremony for successful examinees will be held on November 4 (Friday), 1PM at the Manila Hotel. Pre-registration for the said event is required. Please click on this link for more details.

The ICP Election Committee is pleased to announce the results of the elections for ICP Board of Directors. The newly elected board members (in bold) who will serve from 2016 to 2019 are:

We would like to thank all those who voted / participated in this election. Let us all continue to support the different activities of ICP.

Please click on the following names to view their respective curriculum vitae.

The Election will be up to 17 June 2016 (Friday). You may download the election ballot by clicking at this link. Additional instructions may be found on the said ballot. Please accomplish the ballot and send it via email to ICPComelec@gmail.com on or before 17 June 2016.